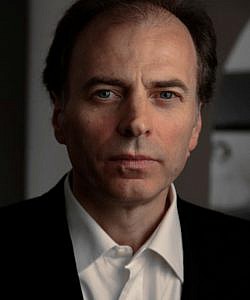 Luca Crocicchi was born in Castello di Cantagallo, Florence, in 1958. His first pictorial experiences date back to the seventies.

In 1984 Testori invited him to the collective Artists and Writers held at the Rotonda della Besana in Milan. In 1985 he held his first solo exhibition at the Compagnia del Disegno in Milan. In 1986 he exhibited in the large rooms of Palazzo Novellucci in Prato, in the following years he also participated in national collective exhibitions (such as the Biennial of Sacred and Contemporary Art at the Magazzini del Sale in Siena, the exhibition Vitalità della figurazione at Palazzo della Permanente in Milan , the Michetti Prize in Francavilla al Mare, Proposed art at the Ricci Oddi Gallery in Piacenza) and international (including an exhibition in Lisbon, one at the Italian Cultural Institute in Brussels) and is hosted with solo exhibitions in Brescia, Carnate , Modena, Naples, in public and private spaces, and again at the Compagnia del disegno. In the meantime he stayed in Paris and Rome, where, in 1996, he took part in the XII Quadrennial in Rome, winning the Chamber of Deputies Award.

In 1997, still in Rome, he was among the protagonists of Ten young artists at the Quadriennale of Palazzo Montecitorio. In 1998 he held a personal exhibition at Palazzo Sarcinelli, in Conegliano, and was invited to The project of Essence, an exhibition at the Nicolas Sursock Museum in Beirut, then at the Al-Assad National Library in Damascus, the Royal Cultural Center in Amman, Yarmouk University of Irbid and the Gezira Arte Center Zamalek of Cairo. After a new stay in Paris, he returned to Italy and starred in an anthology curated by Marco Goldin. Followed by numerous other solo and group exhibitions, among which La ritrovata painting, at the Vittoriano in Rome, Twenty artists in Sassocorvaro, at the Rocca di Sassocorvaro, Il Novecento and beyond, at the Galleria l’Immagine in Arezzo, History of the Figurative Arts in the late twentieth century Prato in the Ancient Rooms of Santa Caterina in Prato.

In 2003 he was among the artists of the exhibitions Giovanni Testori, the secrets of Milan, at Palazzo Reale, Da Tiziano at De Chirico, in the Castle of San Michele in Cagliari and Da Antonello da Messina at De Chirico at the Albergo delle Povere in Palermo, and exhibits in a solo exhibition at the Galleria Comunale of Modern and Contemporary Art in Arezzo. The following year he will be a guest instead of the Papal Cartiera di Ascoli Piceno, always with a personal exhibition and the Civic Museum of San Sepolcro in Arezzo, in a collective exhibition. Also in the two thousand years there are numerous exhibitions: in Stupinigi, with the exhibition Il Male; in Milan in Italian Art Painting; in Siena and Bologna in the exhibition Arte, Genio e Follia, and in Recanati, with a solo exhibition dedicated to Leopardi. In 2011 he is at the Venice Biennale, Italian Pavilion and in 2012 in Germany, in the exhibition After de Chirico, Contemporary Italian metaphysical painting.